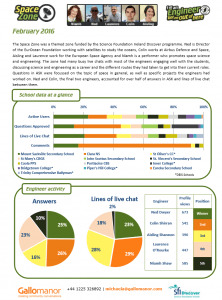 The Space Zone was a themed zone funded by the Science Foundation Ireland Discover programme. Ned is Director of the EurOcean Foundation working with satellites to study the oceans, Colin works at Airbus Defence and Space, Aisling and Laurence work for the European Space Agency and Niamh is a performer who promotes space science and engineering.

The zone had many busy live chats with most of the engineers engaging well with the students, discussing science and engineering as a career and the different routes they had taken to get into their current roles. Questions in ASK were focussed on the topic of space in general, as well as specific projects the engineers had worked on. Ned and Colin, the final two engineers, accounted for over half of answers in ASK and lines of live chat between them.